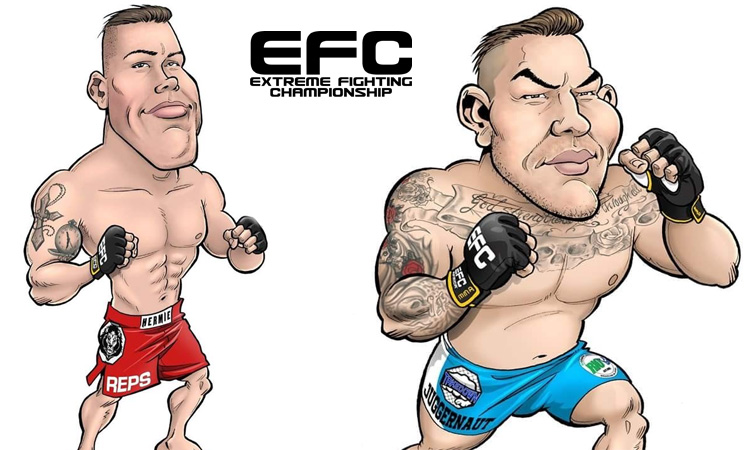 The Drotschie brothers set to be part of only a handful of siblings to have entered the EFC hexagon.

Hermie Drotschie will make the walk for the first time at EFC 72, but he has a better sense than most debutants about the bright lights given his older brother is former light-heavyweight champion Gideon.

Both men are scheduled to fight at GrandWest Arena in Cape Town on Saturday, with Hermie paired up with Francois Cundari, and Gideon dropping down to middleweight to welcome Englishman Jenaid Ebanks on the main card.

Other siblings to have competed in the EFC include Niel and Dricus du Plessis, the Botha twins Hanru and Pierre, and the Buirski trio of David, Gareth and Matthew.

Hermie, who has an amateur record of 4-1 plus a kickboxing victory, is familiar with the set-up having been in Gideon’s corner for past fights in the promotion.

“I’ve felt that atmosphere. I’ve been in there and had my heart pumping. If you just make the walk with someone you’re in there pretty much with them. Your heart starts beating, you feel the beat of the stadium, everyone is screaming. It might just as well be you. The only difference is when the cage door closes, that’s about it. Up until the ref stops it or the last buzzer sounds, your heart is racing man. It’s about the same. The result you can’t do anything about it. In the cage you can do something about the result, outside you can’t do much.”

The 26-year-old says Gideon – the owner of Takedown Martial Arts And Fitness Academy in Retreat – has been pushing him in training. His Reps MMA teammates Armand Scheepers, Bruno Mkulu and Willem Smith are also representing Rico Hattingh’s Belville-based gym this weekend.

“I think it adds more of a good vibe [both fighting on the card]. We train together, we are both dieting together, we are going through the same stuff. Everything we can relate. I can go, ‘Ja man, how are you feeling?’ He’s like, ‘This is a bit sore’. I’m like, ‘Ja, me too’. Then we rest and go again. It’s almost like we are bonding again from the beginning.”

“I have fought five-minute rounds, that’s not too new. Just having to be more prepared. I have to be more on my game, it’s more a step up. It’s still just a fight.”

While ‘a fight’s a fight’ to Hermie, his mom understandably gets “super nervous” when her sons go into battle.

“My dad not as much. My mom is like, we have to give her tickets and force here to come. She doesn’t like watching. I think now it is even worse, now she has to watch me then wait the whole night then watch him. It’s gonna be either a very great one or a very bad one – there’s no in between,” he says with a laugh.

Hermie, who is strong on the ground like Cundari (2-2) but believes in his stand-up, expects the Silverback Mixed Martial Arts product to come out hard as he seeks to respond from a submission loss to Luke Michael in March.

“I really hope he had a good training camp. I know he’s gonna come hard. And ja, me and him can have a beer afterwards but when the cage door closes it’s on. Obviously when he signed to fight me, he thinks he can beat me, so that’s already something to fight for.”

Do you think both Drotschie brothers have what it takes to get a win this weekend? Let us know in the comments below.