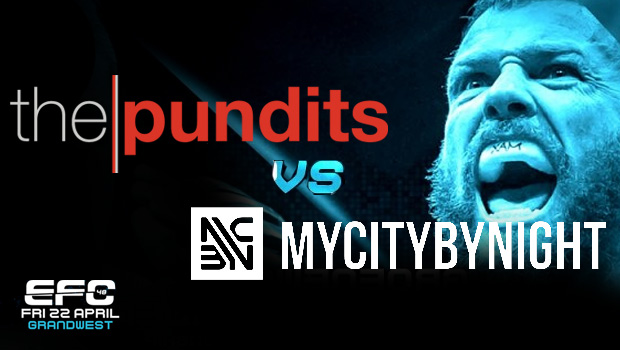 EFC Worldwide is returning to Cape Town this Firday, 22 April 2016, and we cannot be more excited! It has been a while since we’ve been ringside at Grand West for some MMA action and word on the street is we can expect some roundhouse kicks with a good chance of raining elbows.

Because EFC 48 has such a strong Cape Town flavor on the fight card, we thought we’d make things interesting with a prediction challenge against Cape Town’s very own MyCityByNight – we always have a jol with the MCBN okes on fight nights and this is bound to put some extra flavor on the occasion.

Brendan has been a personal favourite of mine since I started watching EFC and the fact that he is a Cape Town boy, puts even more pressure on me to back him.

This fight is for the vacant heavyweight title and we back Groenewald to beat van Heerden in a very tightly contested fight.

With Pena refusing to defend his title in Cape Town, Sayed and Doyle now have a chance to win the interim Bantamweight title.

Sayed has never lost a fight in EFC and his explosive energy should be enough to beat the hard-hitting Doyle.

Cape Town’s EFC poster boy is back in action – Madge has had some difficulty since losing his Lightweight title but he seems determined to come back stronger. If his social media feeds are anything to go by, Don’s been training hard and should be ready for this one!

Magic Man Madge will make the Mother City proud with a win over Chelin.

There’s a reason why Kabanda goes by the name of BLOCK – he is slightly shorter than Hulme with a shorter reach, but if he lands some punches with his strong boxing background, he should win this one with ease.

We back Block to make it 4 wins from 4 in his EFC career.

Two fighters with the identical EFC record of 5-3-0, which should make for an interesting fight.

Mdoko does not like to leave fights to go all the way to judges’ decision and should see Botha off before it goes to that.

Rounding off our predictions by once again backing the Cape Town fighter. Bruno Mukulu is the most experienced going into this one and his powerful punching might be too much for Pretorius to handle.

We want fans of The Pundits and MyCityByNight to join in on the action – by making some predictions of your own, you can win a set of double tickets to EFC 48 at Grand West Arena this coming Friday.

Here’s how you can enter:

Winners will be chosen at random and announced on Thursday 21 April 2016.