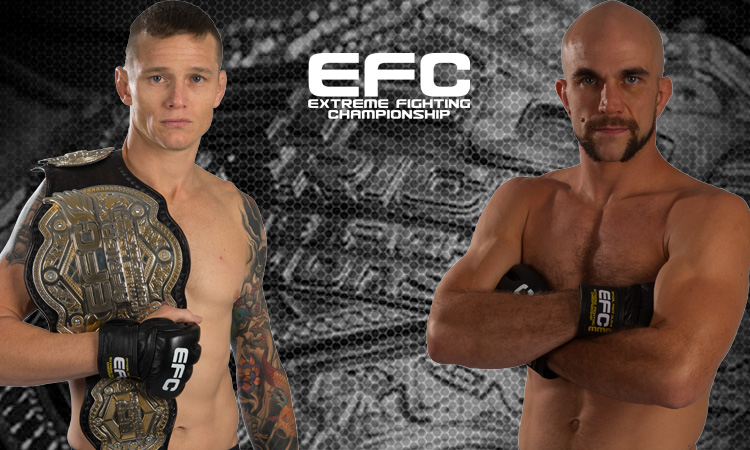 The matchmakers have matched some amazing fights for the evening and we’re most definitely looking forward to the Van Staden vs Mazany Lightweight Title bout.

EFC lightweight champion Martin van Staden has questioned whether Dave Mazany’s chin will be compromised by a tough weight cut.

Van Staden (26-10) will defend his crown for the first time against Mazany (16-6) at GrandWest Arena in Cape Town on Saturday night.

‘The Punisher’, who has finished his last four opponents with strikes, expects to do the same to the well-rounded Alaskan.

“You know, I saw him over the weekend in Cape Town and he looks like 80+kg. He’s a big guy. He’s short and stocky and looks very full.

“So I think he struggles to make weight and he puts it back badly, so I think that’s why he is so ‘chinny’,” says the 35-year-old Fight Fit Militia standout.

Van Staden claimed the strap by knocking out Englishman Gavin Hughes in March, having twice come up short in previous title fights at welterweight.

Mazany has taken out FFM’s Themba Gorino and Chris Bright since losing the title to Van Staden’s former teammate Don Madge in April 2017.

Madge later vacated the belt when he got called up to the UFC in February. South African fans are still waiting patiently for Madge to make his UFC debut as he lost out previously due to an injury.

Who’s your money on for Van Staden vs Mazany? Tell us in the comments below.