Watch: What Impact does the Premier Skills Program have on Real People?

In Part 2 of our focus on  the Premier Skills Program, we take a look at what impact the program has on real people in South Africa.

I’ve just cruised into the heart of Gugulethu, that’s the township along the N2 just outside Cape Town International Airport. My mission is to locate Mseki Junior Primary School, the base of operations for Wonderboy Qeqe. I’ve unwittingly arrived just as the school bell tolls and a minute after parking I’m swarmed by enthusiastic kids, it’s Friday.

A few seconds later and a little one calls out “coach!”

My vicinity just then teeming with activity thinned as a hundred little voices shouted all at once “coach, coach!” Wonderboy had emerged and my flock immediately and forcefully descended on him. The rest of our meeting would be conducted with a cloud of school kids buzzing around their ‘Coach’. The fact that he was their hero was evident despite the fact that he never even grew up here, rather in the Durban township of Umlazi. Undeterred, we moved to the soccer field and tried our best to ignore the melee. 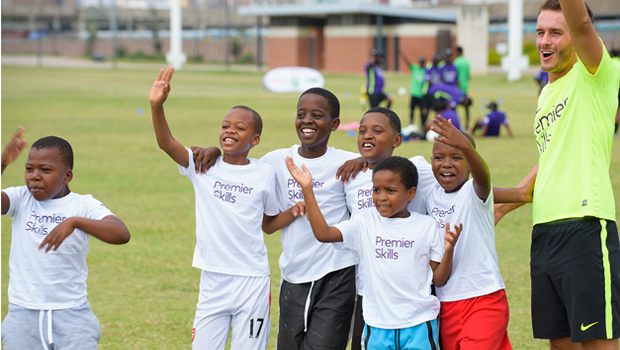 “I started coaching at an early age in Umlazi. I always had support from my mom to do so. I used to work with my own age group, encouraging them to come up with their own ideas, to challenge me. So when the Premier Skills programme came up I thought now I can be challenged as well. The difference since then has been huge. Premier Skills gave me the ability to be a facilitator in a classroom, to be able to interact and conduct practical sessions. I’m not just the field coach I used to be. As a result I’m getting noticed more than before in the communities.”

He insists the other coaches respect him more now but more importantly Wonderboy has become a role model for these young ones.

“They want to interact and engage with me, and they’re inspired to become better players. And even better than that, they shy away from doing wrong things and looking instead for more sport activities to be involved in.” He adds “I definitely feel like a source of positivity in this community now, with these kids, both genders, keeping themselves busy with soccer and sport after school.”

This won’t be the first instance of the program having a positive effect on young and impressionable soccer players and coaches. 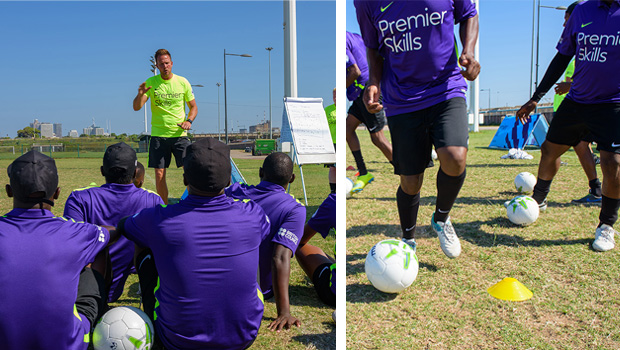 “I grew up in Eerste River where gangsterism and crime is of a high rate. My home life wasn’t difficult in any way really, I think I was just influenced by peer pressure and the need to experiment – I was involved in wrongful activities.”

Boredom and keeping the wrong company seems to be a repeat offenders in what gets the youth in trouble, sport gets them out and introduces them to discipline and self-awareness.

“For six or seven years I disappointed my parents, it was a rough time. I lost family and friends, all part of living that sort of lifestyle, sadly.”

Sergio has since been reformed for over five years, getting involved with the Oasis Sports Foundation, a local collective that promote and nurture grass-roots sporting communities, primarily for youth at risk of losing their lives to crime.

“That’s where I first encountered coaching and working with youth, which is something I realised I loved. That’s also where I got introduced to the Premier Skills program. After phase 1 I knew this was where I needed to be.”

Before Premier Skills, Sergio admits to be being a very unorganised coach, knowing nothing about taking 30 – 40 kids and running courses or doing sessions with them.

“The program taught me patience, it gave me the confidence to speak in front of a hundred people. You develop new skills, you gain so much knowledge which you don’t just keep to yourself. Premier Skills is all about sharing. The way I measure my success since then is the more positive influence I have with the youth.”

He loves it when the kids greet him with a “Hi Coach Sergio” and that he can offer them one-on-one sessions now, something he wouldn’t have been able to do in the past.

“If you believe you are a coach, this course gives you everything you need to go out there and be the exact kind of coach you want to be.”

Sergio insists that becoming a coach is incredibly hard work, he means that positively – an opportunity to almost be a parent to so many. He’s never looked back. 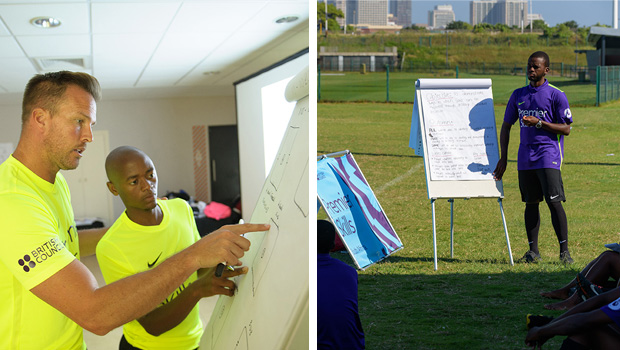 Neither has Liezl Windvogel, a spirited Level 1 Coach Educator from Eldorado Park in Johannesburg. Her initial experience has been similar to Sergio and Wonderboy saying “through the program I’ve seen my own growth; becoming more confident, from being an introvert and very shy, I now also conduct workshops and speak in front of people I don’t know.”

She’s had the privilege of travelling and establishing a network of coaches. She’s also had a similar effect on her communities but more than that, has inspired many with her own story.

“When people are interested in what I do, and ask questions, I feel that my story is something worth telling. I’m originally from Port Elizabeth, studied there but did nothing in any way sport-related. Definitely didn’t think it was something I could make a career out of.”

Liezl would eventually go on to start her own 5-a-side social soccer team and starting coaching informally. “After hearing abuot Premiere Skills I decided to take it a lot more seriously and follow my passion.” Which she did with great success.

BIGGEST BARRIERS TO ENTRY INTO COACHING ACCORDING TO THE COACHES

Wonderboy thinks its unemployment. “Young coaches love to get involved with the community teams, to learn and be a part of something but it takes a lot of time and they still have their families to support.”

It’s hard for them to pursue their dreams of taking young ones off the streets and onto the field without financial stability or support.

Sergio says peer pressure. “In my neighbourhood it’s definitely the bad influences. Don’t get me wrong, I don’t think because there’s peer pressure or influence that your life is over – but then it’s up to you. It’s what your goals are.” These opportunities are whatever you want them to be.

For Liezl the challenge was knowledge. “I didn’t know how to go about enrolling in coaching courses, where to go, what to do, where to apply. In fact, I didn’t even know that a person could do different categories of licenses to become a coach.”

Community coaches don’t have resources to attend courses – not the time or even the awareness of their existence. Add to that the fact that they’re potentially far away and you have another set of challenges – geographic and economic.

While the appeal of coaching no doubt stems from a love of the game and the interest in training and working with people, the positive influence in grassroots communities is overwhelming. The British Council Premier Skills may not be the only means to this end, but it has helped equip a few of the next generation of brave coaches in South Africa who have empowered themselves to make what they do really count.