Think back to being a kid. It’s summer and you’re running giddily on the sand, making divots and dodging waves. Or you’re charging through dewy grass chasing the first fireflies to emerge in the waning dusk. It felt good to run free, unburdened by shoes or socks, connecting with the ground, inciting your senses with texture and temperature. That feeling, those sensory fireworks, fuel the concept of natural motion and Nike’s mission to create shoes that place an athlete closer to the ground, more in tune with one’s body and innate physical abilities.

“It’s all about the feet — it’s not about the shoes.” — Nike co-founder Bill Bowerman

Bowerman’s fundamental belief that shoes should provide protection and traction but minimal weight and zero distraction guides the design philosophy of natural motion. This approach is seen in flexible Nike Free footwear, first introduced a decade ago to mimic the biomechanics of running barefoot. Nike Free has expanded what a shoe can do for the foot and changed he way shoes are made at Nike.

BEFORE NIKE FREE THERE WAS…

The revolution didn’t occur overnight. Nike Free stems from a succession of lightweight, close-fitting shoes starting with the Nike Cortez. 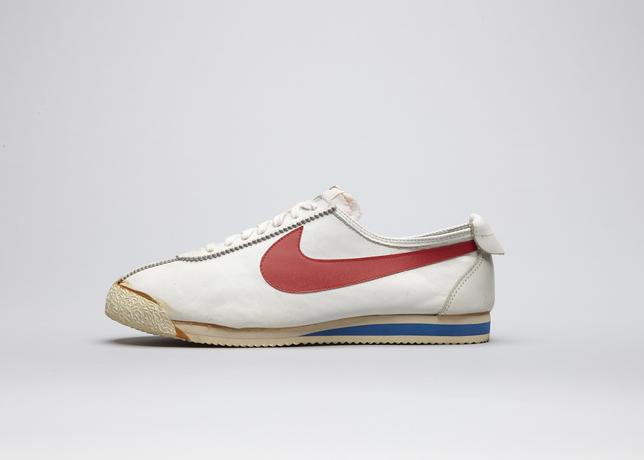 In 1972, Bowerman designed the Cortez, the first track shoe created by Nike and the first shoe with a full-length midsole made from dual-density foam. It exemplified Bowerman’s obsession with stripped-down, high-performance running footwear and influenced Nike designers approach to footwear for decades to come. “Bowerman had the idea that simpler was better,” says Tobie Hatfield, Director of Athlete Innovations and Explorations at Nike. “These shoes are still shining examples of giving an athlete exactly what they need.” 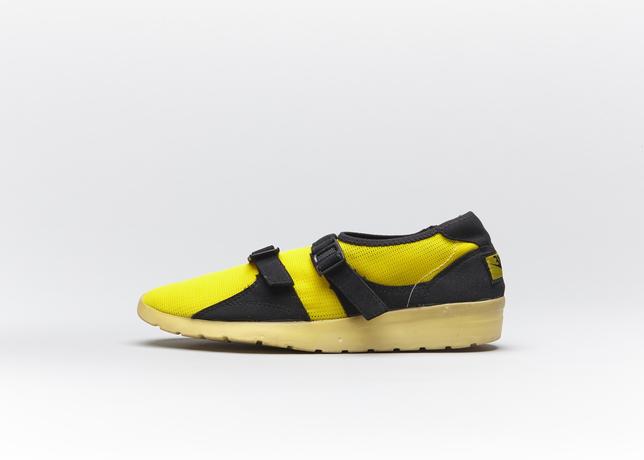 Next came the radical Nike Sock Racer. It was innovative in many ways. It was the first Nike shoe intended to be worn without socks, had no laces and was made of a single mono-mesh. Runner Ingrid Kristiansen wore the high-concept racing shoe when she won the 1986 Boston Marathon. 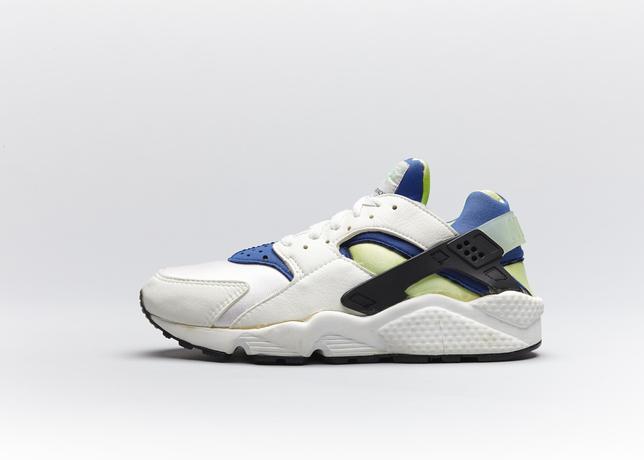 In 1991, Tinker Hatfield, designer of the Air Max, many Air Jordans, and co-designer, along with Hiroshi Fujiwara and Mark Parker, of Nike HTM models, came up with the Nike Air Huarache. It was distinguished by a neoprene upper, which at the time had only been used in footwear on surf booties. It was Nike’s first running shoe without a structural heel counter – only a rubber strap came around the Achilles. Today’s Nike Free models also lack a heel counter. 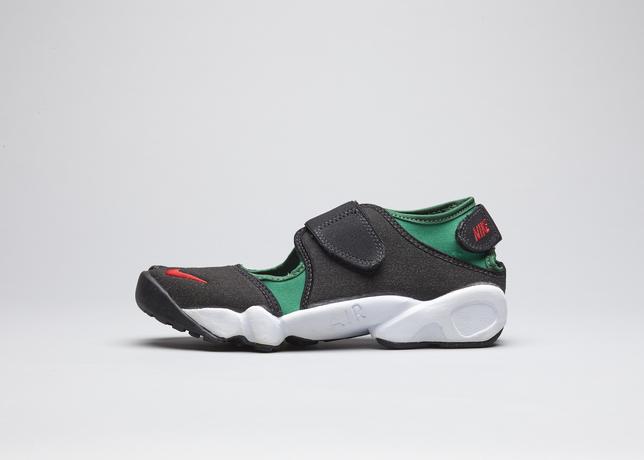 The Nike Air Rift was an early attempt at enhancing natural motion and was designed with the understanding that the toe is a significant source of propulsion for the foot. The design team set out to create a shoe inspired by elite distance runners who ran barefoot. The split-toed stretch sandal caught the eye of style setters and quickly crossed over to the street. 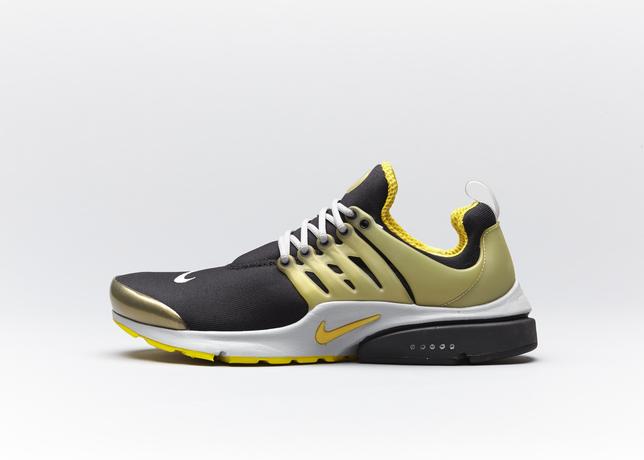 Finally, Tobie Hatfield designed the Nike Air Presto in response to the overprotective running shoes of the 1990s. The slim design comprised a loose elastic upper and thin plastic lattice on the shoe’s sides that held the laces. Sneaker writer Gary Warnett says of the design, “Nike Air Presto is a T-shirt for the foot. Ditching numbers for an XXXS-XXXL sizing structure, Sock Racer DNA is present in the neoprene fit and commitment to minimalism, while the sense of eccentricity made it an instant favorite with runners and admirers of progressive design.”

“People ask me why we never made a Presto 2,” says Tobie Hatfield. “I always tell them we did – it’s called the Nike Free.”

On a trip to Stanford University in 2001, a group of Nike designers that included Tobie Hatfield observed coach Vin Lananna’s track team training barefoot on the grass of the university’s golf course. Lananna shared his speculation that barefoot training strengthened the runners’ feet and thereby improved the athletes’ performance. This insight catalyzed Nike Free.

Using advanced sports science technologies such as pressure mapping and motion capture, researchers at Nike’s sport research lab were able to analyze the biomechanics of the toes, ankles, knees and hips as athletes ran barefoot on grass. This information provided the scientific basis for designers as they set out to design the first Nike Free. 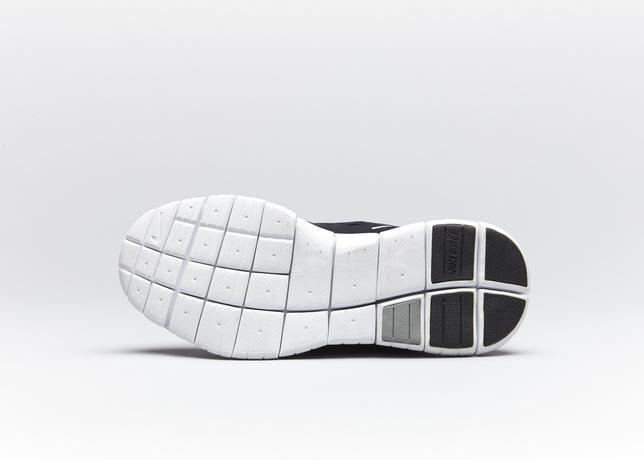 FOUND IN THE FREEZER

With the knowledge gained from the sport research lab, Hatfield and his team knew they “needed to focus attention on the bottom of the shoe” and “break up the sole to give it some sort of articulation.” Searching for solutions, Hatfield thought of ice cube trays and how they segment solid blocks of ice, making it easy to bend the tray.

Inspired by the ice cube tray, the team designed a new kinetic last, assembled from multiple pieces of solid material and connected with a piece of flexible textile. The resulting segmented form moves organically like the foot and became a driving symbol for natural motion and flexibility among Nike’s designers as they continued work on the first Nike Free shoe. 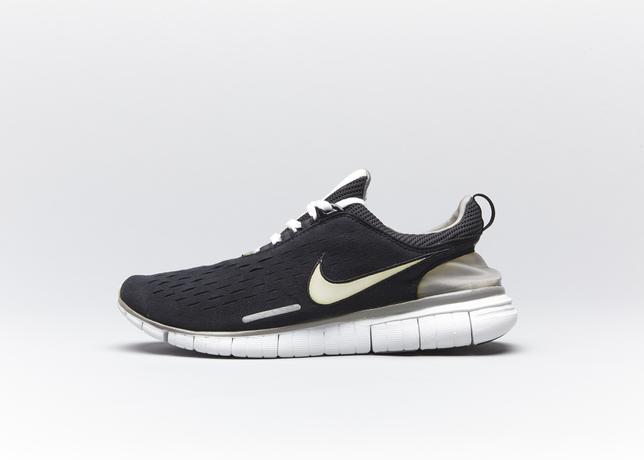 In 2002, early production samples of the first Nike Free 5.0 were ready for testing. Nike’s sport research lab put the shoe through its paces to see how it compared to traditional running shoes, and to gauge the benefits of running naturally. Compared with a control group that ran and trained in traditional running shoes, a group that ran and trained in the Nike Free 5.0 showed increased strength and muscle growth in the foot and ankle; greater flexibility in the toes, feet and ankles; and improved overall balance.

“Using Nike Free footwear in my training is all about strengthening my feet,” says world champion sprinter Allyson Felix. “I really like having that natural movement in my shoes. Everyone’s feet are different, so it’s great to have a shoe that really moves with you.”

The Nike Free 5.0 hit the market in the spring of 2004, immediately finding a fervent audience. It also introduced a new understanding of biomechanics into performance footwear and established a guiding design philosophy. While Nike Free is the expression of natural motion in running and training footwear, the design ethos influences almost everything else at Nike. Innovative technologies such as Nike Flyknit, Flywire and Dri-FIT Touch are all designed to reduce restrictions to movement, promote natural motion, and allow athletes to achieve their unique movement potential.