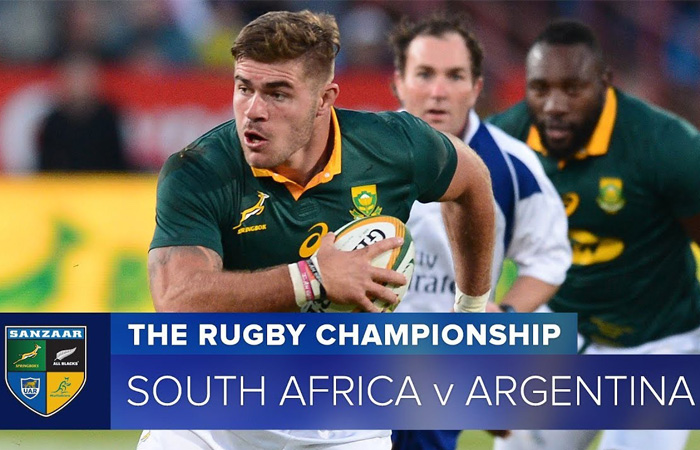 It is 5 points in the bag but we all felt a little uneasy watching the game knowing that at one stage, after that intercept try, the Argies were just 6 points away with just over 10 minutes to play. The nerves set in and it was like we were all on the see saw in the middle waiting for it to fall. The problem was, we didn’t know which way it would fall.

It fell our side, courtesy of a Faf de Klerk snipe and as my Dad says ‘All is well that ends well’ but is it?

We were not great at set pieces, particularly the line out, our loosies played well but we did seem to miss a little something at the breakdown and Pollard’s kicking was atrocious. These issues are well documented over the last few days and more importantly addressed by Rassie Erasmus in a post match interview that was a breath of fresh air.

It was not filled with little gems straight out of the ‘talking to media’ handbook, it was an honest account of the issues, reasons for them and a promise that work will be done.

Now that that is out the way, we get to talk about Eben, Aphiwe and Makazole who were incredible on the day and were supported well by their partners in crime all over the park. What a performance by those 3 and it would be an oversight not to mention Willie le Roux and Pieter Steph du Toit’s contribution.

There are so many talking points that deserve their own discussion but we are laying a decent foundation I feel, and we have plenty to do to polish it.

@justus_beets – Like that catchy song goes “You’re gonna miss me when I’m gone” We are going to miss Beast when he retires.
@jaredwright17 – Just continues to perform, his scrummaging was on point and made 13 carries.
@JudgeRugby – No secret that I am a big fan and he was great again. Such an important part of the team and consistent on top of that.

@justus_beets – Still has trouble hitting a barn door, but no such issue when he throws himself at a ruck, we’ll take 4 turnovers from him on a “bad” night.
@jaredwright17 – Fantastic open play but did not find his jumpers which is more important.
@JudgeRugby – Struggled at set pieces and was a pest at breakdown BUT not his usual self. Not a great day out for him but it was decent for the mere mortal

@justus_beets – Felt a bit like he was off the field and only came on for scrums. But still less of a liability than Ruan Dreyer when he does scrum.
@jaredwright17 – Possibly the best I have seen him play but still looks off the pace and unfit.
@JudgeRugby – Surprised many as he always looks the least conditioned player but scrummed well. Did the basics but does need to grow more within the game (Not physically he he he)

@justus_beets – I felt starting him was risky, I hope it’s something we don’t get drunk on, but adult comments aside, I just want to say WHAT A RETURN!
@jaredwright17 – The greatest comeback since AC/DC lost Bon Scott.
@JudgeRugby – Immense, there was not a fan,player or legend out there who did not stand and applaud the man. SUBLIME

@justus_beets – Solid game. Did give away a silly penalty playing a Pumaguares player in the air, but no real issues otherwise.
@jaredwright17 – Got through a boatload of work – nothing new here.
@JudgeRugby – Love seeing him and Eben partner up at 4 & 5 so he already earned points for that, but a great display on the day.

@justus_beets – People will hate me for saying this but I want to see more intensity from Flo. This was the Pumaguares here in SA, we need experienced players to be more balls to the wall.
@jaredwright17 – The best Flo to return from Bath in a long time.
@JudgeRugby – I thought he operated ok but didn’t execute well. We needed an extra 15% from him and Marx and we score 2 more tries. We will need an extra 20% against Australia and NZ though

@justus_beets – Always a threat, but I think he’s had better games recently. Which might be why Coach Rassie basically said its not set in stone who he’ll be backing as World Cup skipper.
@jaredwright17 – Made some good metres on attack and weighed in with 10 tackles.
@JudgeRugby – I think he is a good captain and a solid player. He fulfilled a different role on Saturday and did not dissapoint

@justus_beets – The former captain looking to not only put his name in the hat but keep it there. Not Duane Vermeulen, but not a bad game.
@jaredwright17 – Good return to test rugby, not quite Thor but had a strong game.
@JudgeRugby – You can not compare Thor and Whiteley as they are completely different players. The dynamic was changed by Rassie due to team make up and it needs polishing. Didn’t let anyone down and supported well.

@justus_beets – Steady enough outing for the explosive scrumhalf.
@jaredwright17 – 1 try and 3 try assists – not bad for one day of work. Slow start but finished excellently.
@JudgeRugby – Made many errors especially with some kicks and sling passes but that was overshadowed by his attacking play which is always class. Personally, I feel he has plenty still to do still but he is defo on the way

@justus_beets – What a shocker of a game with the boot. On the night he couldn’t line up a ladder on train tracks. He’s no Morne Steyn, but he’s better than this.
@jaredwright17 – Solid defensively, fairly anonymous elsewhere and he needs to sort his kicking from the tee.
@JudgeRugby – Not a great outing. Kicking aside, his passing is being highlighted but he did get the backs going. Below par on the day.

@justus_beets – I like when players show intensity and just a real hunger for playing. He wants to be everywhere and help with everything. Let’s hope for quite a few more tries in the comp.
@jaredwright17 – This guy is something special. Another fantastic performance and chased kicks extremely well.
@JudgeRugby – Brilliant player and so settled in his position and comfortable. His attitude on and off the field is something quite special. As Bryan Habana mentioned, he is not the next Habana he is the next Aphiwe Dyantyi

@justus_beets – A bruiser of a player and he’s doing well enough for the amount of caps he has. Didn’t lose his mind in some of the off the ball stuff.
@jaredwright17 – Hit and miss for Esterhuizen, strong defensively but wasn’t potent enough on attack.
@JudgeRugby – Decent showing as the pressure had to have been there. Lovely seeing him and Am in Bok jerseys and this will grow into something good. Made great runs and that opening try was all about the 12 and 13 combo

@justus_beets – Seems a bit light beer at times, but he works well enough with what he gets.
@jaredwright17 – Made clever decisions on attack and defence and is looking more and more like a long-term solution at 13.
@JudgeRugby – The combo worked and Am is class. Made a few GREAT reads on defence and attacks well; plus, he fights for turnovers. He must stay.

@justus_beets – Like his partner on the other side, he showed some real intent and he looks like he’s back to his try scoring form.
@jaredwright17 – Did what was asked of him and did it well. Scored two tries and showed off his pace out wide.
@JudgeRugby – Did not let anyone down and watching him beat his man on the outside is something special. Best finisher in SA, I recon. Not tested on D and that for me is the litmus test before I will have to eat my words on the man in a 14 jumper.

@justus_beets – Not the new kid on the block anymore, he has to work smarter and shepherd the young guys. A well timed cross kick showed he’s still got some magic left.
@jaredwright17 – His running lines are simply superb and he links up well on attack.
@JudgeRugby – Rassie is using him in the way that best suits his play. Communication and experience from his colleagues will better this but on attack he provides something quite special and was handy on defence.

That’s it for this week’s player ratings for the Springboks vs Argentina. Do you agree with our team? Don’t you? Tell us on Twitter.