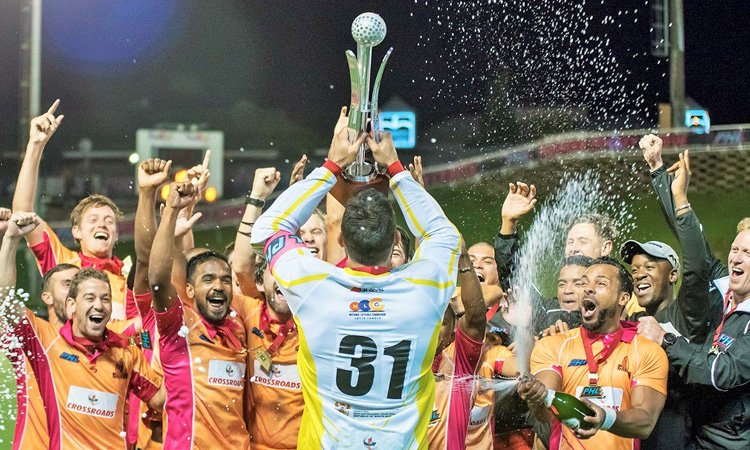 The Drakensberg Dragons streamed to the top of the log by the bonus point secured in the crushing 6-1 victory over semi-final opponents the Maropeng Cavemen. After losing their opening game against the Addo Elephants the Dragons have won four on the trot and find themselves with momentum on their side. With 17 goals they are the tournament’s top scorers and Richard Pautz leads the individual standings too. If they are to progress to the final the likes of the in-form Mo Mea, Bili Ntuli, Peter Jarvis and Dylan Swanepoel will be integral.

“We have played really well so far. We have done well in dominating statistically but this year we have taken our chances.” Shared Sihle Ntuli, “we know that the Cavemen have tremendous quality and we will have to play to our best, but there is no doubt that if we play to our potential we can be in the 16:00 game on Sunday”

The Addo Elephants took the CTM Premier Hockey League 2018 by storm with four wins out the blocks before they lost out in the final group game to their semi-final opponents. The Elephants boast the attacking dynamic duo Ingatius Malgraff and Julian Hykes, the two highest scorers in PHL history, who if they fire on the same day are unplayable. In Miguel da Graca they have a captain who knows how to win and in Daniel Bell they have arguably the player of the tournament so far. Andrew Manson also continues to play his best hockey for the Elephants who also welcome Cerezo Comersamy back from injury.

“The 2018 PHL has gone really well for us and we are happy with the group stages.” Said Cheslyn Gie, “we had a flat final game on Sunday, but knowing we were already through and the players were tired played into that. I am excited for this weekend and the chance to get back to the CTM PHL final again!”

The Gazelles lost their opening two games, one via the dreaded shootout, before storming back into the semi-final picture with three wins in a row. They are the only one of the semi-finalists with a new coach this year and Ashlin will be delighted with the progress the team has made. They scored 16 goals, the second most, through 11 different players showing their goal scoring ability across the team. Connor Beauchamp has one of the more lethal flicks in SA Hockey, while Taine Paton and Brandon James are playing the best hockey they have played in recent years. Michael Abrahams has had a great CTM PHL, while Tyson Dlungwana and Gerald Mpopo continue to produce fantastic displays and in Siya Nolutshungu they have a match winner in goals.

“The players have been awesome to work with, open to new ideas and a different way of doing things that they might not be accustomed to,” shared Ashlin Freddy “we are improving each game as a unit and we are excited for the next stage of the tournament. They are a very good attacking side which presents numerous challenges, so we will need to be solid defensively if we are to get a result.”

The Cavemen experienced their toughest group stage of CTM Premier Hockey League history but made it safely through to the final four on the back of the opening weekend 7 points. They also welcome back influential Ricky West for this weekend in a major coup for the double defending champions. They are the only team in the semi-final line-up to have never lost a knock out game at the CTM Premier Hockey League. Although they are known as an experienced side featuring the likes of Tommy Hammond, Rassie Pieterse, Lance Louw and Reza Rosenberg in the ranks, it’s been Chad Futcher, Rayner York, Kyle Lion-Cachet and Peabo Lembethe who have been the stars for the Sanders in his quest for the third star!

“Look we haven’t had the best group stage but our goal was to get to the final four and we are there.” Shared Mark Sanders, “we know that in most of the games we have made mistakes, but we are ready for this weekend. The tournament starts now, and we look forward to defending our crown!”