Rugby: Springboks breeze past Pumas to extend their good form 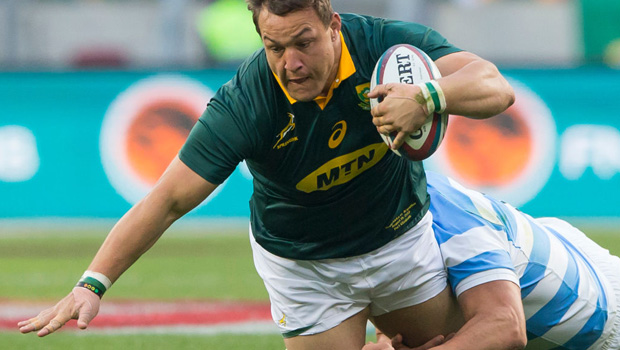 The Springboks claimed a 37-15 convincing victory against Argentina in their opening Castle Lager Rugby Championship match at the Nelson Mandela Bay Stadium on Saturday afternoon.

The Springboks were looking to continue their resurgent form in 2017, following a 3-0 white-wash of France in the June Internationals. Both sides showed early nerves as they made numerous mistakes in front of a 41 000 strong Port Elizabeth crowd. The Boks started strongly and had early possession, but a resolute Pumas defence kept the Boks at bay in the early stages of the encounter, forcing flyhalf Elton Janjties to attempt an early drop goal.

The Pumas defence finally gave in, when flank Tomas Lezana was adjudged to have entered the ruck from the side. Jantjies was on hand to convert the penalty and put the Boks 3-0 up in the 10th minute. French referee, Romain Poite was again in the centre of controversy, when he halted a promising Bok attack, calling a handling error when television replays showed that the ball had gone backwards off an Argentine hand. The Boks quickly put that misfortune behind them and went back on the attack, with the backline showing silky hands that resulted in a penalty for offside against the Pumas. Jantjies duly stepped up again to slot the penalty and put the Boks 6-0 ahead with a quarter of the first half to go.

The Pumas were not going to be out done though as they soaked up the pressure from the Boks. Their spirited defence was rewarded when they forced a turnover from deep inside their half, unleashing their dangerous backs down the left-hand touchline for scrum-half Martin Landajo to score an unconverted try, bringing the visitors right back into the contest.

The Boks would have the last say of the half though. A well-executed set piece move saw Lions wing Courtnall Skosan show strength and determination through several tackles to dot down under the posts. Jantjies converted and the two sides went into the break with the Boks leading 13-5.

The Pumas started the second half breezier than the first, flyhalf Nicolas Sanchez slotted an early penalty reducing the deficit to just 5 points. Jaco Kriel then won a turnover two minutes later with Jantjies restoring the eight-point cushion, through his third penalty.

The two sides will now face each other in Salta in a fortnight.

WHAT DID YOU MAKE OF THE BOKS’ PERFORMANCE THIS WEEKEND? TELL US IN THE COMMENTS BELOW.