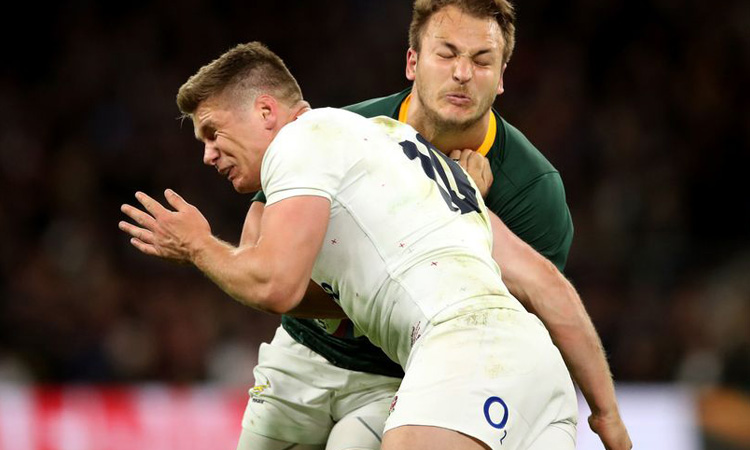 This weekend the Springboks suffered a dramatic one-point loss against the English and although the result wasn’t favourable, there were a few solid performances by our boys. Here is what each player scored via our rugby panel as well as freelance journalist, Ali Stokes, who is from the UK.

Saturday’s Test Match saw Rassie Erasmus’ men go down 12-11 to Eddie Jones’ side and although it was heartbreaking for the South African public, many will feel that referee Angus Gardner had a role to play in the defeat,

Siya Kolisi’s men were denied a penalty in the last minute of the match after Owen Farrell’s no-arm-tackle was deemed legal by the match officials and it gave the Red Roses victory at Twickenham.

@JudgeRugby: Machine, absolute Beast in the absence of the Beast

@Justus_Beets: Too quiet a game from the bastard son of The Thing and Human torch.

@JaredWright17: Solid at the scrum, solid around the park, always solid!

@JaredWright17: Would probably get a 7 if he was a flank, lineouts were terrible.

@JudgeRugby: Machine, 2 good games on the trot, he seems to be settling in, finally

@JaredWright17: Made Alec Hepburn his b#@ch! Was great on defence too.

@JudgeRugby: Not his best game, off early due to injury but maybe this is the price we pay for bringing him back straight into Test Match environment?

@Justus_Beets: Unfortunately walked off with an injury. Always a physical presence.

@JaredWright17: Industrious and aggressive sad to lose him so early and possibly for the rest of the tour.

@JudgeRugby: Huge, yet again. I do prefer him at lock to be honest but there is a thin line in this balancing act

@Justus_Beets: Hard worker. Playing the best rugby of his life at the moment.

@JaredWright17: Another brilliant game, SA Player of the Year already.

@JudgeRugby: Not his greatest game and an off day.

@Justus_Beets: He’s much better than this game. Hopefully he can recover his mojo against the French.

@JaredWright17: Got stuck into the rucks but was shut down on attack struggling to make metres and missed a few tackles.

@JudgeRugby: I was happy to see him at blindside but maybe it isn’t the option or we need him to settle there

@Justus_Beets: Thor was working hard in his new position. Question is, can the Boks afford to not play him at 8 for much longer?

@JaredWright17: He wasn’t as destructive as he was in June but was effective nonetheless, really good in the air too.

@JudgeRugby: Not a bad outing, like what he brings to the team and his awareness and skill is great to watch

@Justus_Beets: Showed so really good hands with the offload to Nkosi, but just too quiet for a no.8 on the day.

@JaredWright17: Superb on defence, nice touches on attack as well.

@JudgeRugby: The kicking aside, which is clearly an instruction as all our 9’s do it, I enjoyed his distribution.

@Justus_Beets: Had good moments, but mostly he just looks like that one Kyknet presenter who landed a working holiday.

@JaredWright17: Slow at times but his kicking and passing game was on point.

@JudgeRugby: A good but not great day. Needs to nail kicks. Every great and winning side has a solid set piece (Read Hooker) and kicker…

@Justus_Beets: Should have dropped back for a drop goal. But his general play was decent enough.

@JaredWright17: Excellent kicking game out of hand but his goal-kicking will come under the spotlight once again.

@JudgeRugby: Little opportunity but his work off the ball decent and good in the air

@Justus_Beets: A learning curve for any good winger. When opposition teams start to notice you, they plan for you. But I’m sure he’ll get through it.

@JaredWright17: Was marked well by Nowell but he competed well in the air and is starting to become more and more of a complete winger.

@JudgeRugby: Yes, he may have not passed when he should have, but he was the best back and Bok on the day

@Justus_Beets: Honestly, he was a menace on attack at times, but when he ran sideways all cocky with the ball in his hand and it got knocked out, that moment summed it up for me.

@JaredWright17: Made metres with relative ease every time he got the ball. Shut down Ben Te’o as well.

@JudgeRugby: Not a great showing but was well wrapped up. We desperately need our 12 & 13 to work on releasing our outside backs

@JaredWright17: Largely ineffective on attack but made a few sharp decision on defence. Didn’t get enough ball from de Allende.

@Justus_Beets: One of the stand out players on the day. I was worried about him coming in, but a good outing in a messy affair.

@JaredWright17: Lively, powerful and went looking for work. Was excellent in the air and did extremely well fend Ben Te’o off to score.

@JudgeRugby: Not ideal and poor kicks every now and then. Must settle at 15, too

@Justus_Beets: England were always going to target the youngster. Not enough experience yet to deal with it. Hopefully I’m wrong.

@JaredWright17: Flashes of brilliance but made a few costly errors including a kick straight into touch in the last 10.

As is custom when the ‘Bokke face the Brits, we got Ali Stokes to give us his thoughts from an opposing perspective:

Strong in the scrum and contributed to the Boks physical showing.

Skewed his lineouts in prime positions on multiple occasions. Less effective than usual around the park. Should have not made it to the 73rd minute.

Strong in the scrum as Kitshoff was and held up his end of the deal on the game line.

Lead the Springbok’s physicality before being forced from the field in the 41st minute. Big loss for the visitors.

A constant pest at the lineout and more than handled himself in the loose. Unsung hero.

Played his hand around the field and at the breakdown, but far from a classic performance from the South African skipper.

Filled the role of enforcer and blunt instrument well. Smashed rucks all day but faded from the game alongside the rest of the Bok pack.

A mobile threat when given the opportunity and dutiful in the contact area. Could have been utilised more during dominant first-half.

Another unsung hero that filled the gap left by Faf de Klerk sat in the stands. No drop in quality when it counted, but Faf’s attacking threat was missed.

Aside from some questionable decision making, especially during the final five minutes, offered a genuine running threat while organising his troops valiantly. Still missing opportunities when the pressure is on.

Scarcely seen when on the front foot. Not permitted the chances he was afforded during the summer.

A constant carrying threat. Got in and around Henry Slade, Ben Te’o and Owen Farrell with ease. Top performer.

Shot up well in defence on occasion to stunt English attack, got the better of opposite number Slade.

Well taken try in the first-half and flaunted impressive ariel skills on occasion. As with Dyanti, underutilised.

One chance to display his dangerous footwork, still finding his feet at Test level. Operated well enough but still a significant drop in threat from Willie le Roux.

What did you make of this weekend’s performance? Tell us in the comments below or send our panel some banter on Twitter!